Mucuna pruriens is an adaptogenic legume that has been used for thousands of years, as a superfood for nutrient density, energy and mood boost. Mucuna Pruriens is one of the only naturally occurring and  most concentrated sources of L-Dopa—as in dopamine, a neurotransmitter that ignites a feeling of joy and bliss. Mucuna helps in male fertility, libido acts as a potent adaptogenic and is considered a powerful nootropic to support brain health. 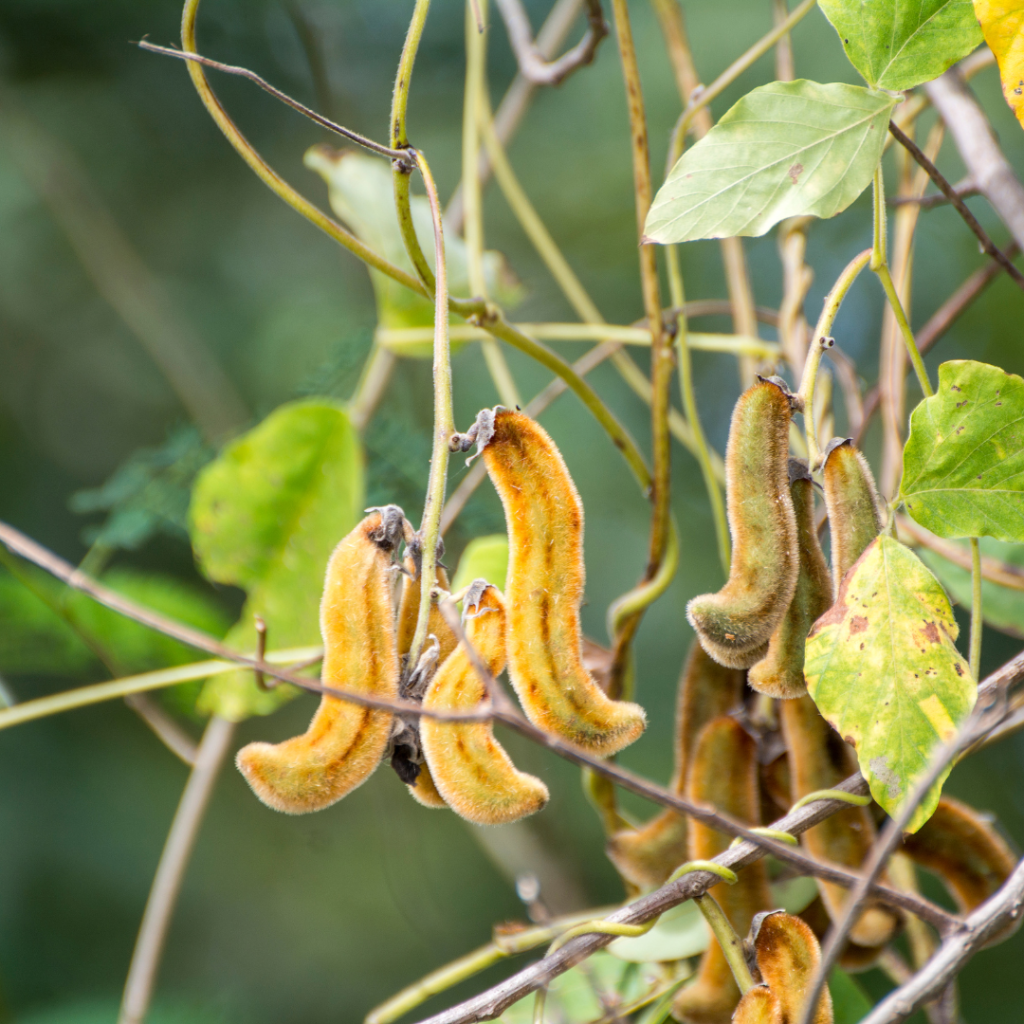 What is MUCUNA PRURIENS

Mucuna pruriens a tropical legume, native to Africa and tropical Asia. The ancient Indian medical system, Ayurveda, traditionally used Mucuna Pruriens as a medicine, as all parts of the Mucuna plant possess medicinal properties. In Indonesia, particularly Java, the beans are eaten and widely known as 'Benguk'. The beans can also be fermented to form a food similar to tempeh and known as Benguk tempe or 'tempe Benguk'

Its English common names include monkey tamarind, velvet bean, or the dopamine bean.

Young Mucuna Pruriens plants are almost completely covered by in hairs, that disappears as they age. The bean is quite itchy to touch, due to it's rich serotonin content on its surface. And it is the seeds of the plant that contain L-Dopa

Mucuna pruriens is enriched with a significant compound known as "levodopa” or L-dopa—an amino acid that is the precursor of the neurotransmitter Dopamine in our brain. This means that when you take Levodopa, your body automatically converts it to dopamine

In fact, this substance L-dopa, is not so strongly represented in any other product worldwide. The seeds of the bean contains a percentage of 3.1–6.1% L-DOPA. This makes Mucuna Pruriens the richest Levodopa Source in the world!

Dopamine is one of the most important neurotransmitters, that is involved in several functions including:

So by taking Mucuna Pruriens you stimulate the dopamine level in your body! 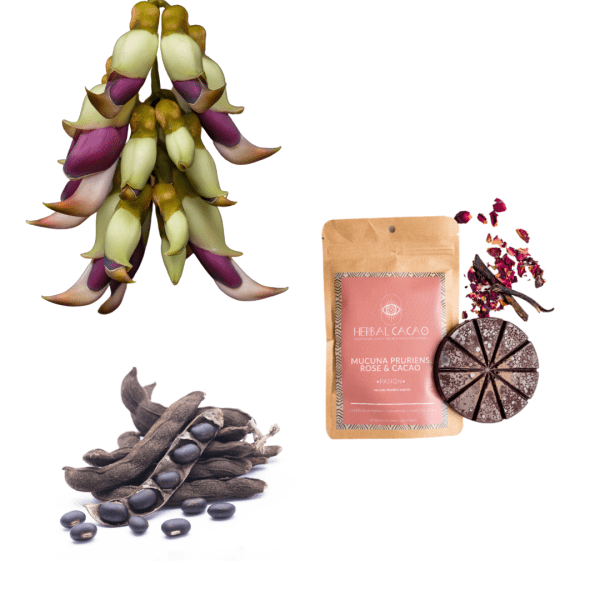 Mucuna pruriens is an established herbal medicine in several countries as an excellent aphrodisiac.

Mucuna Pruriens is useful in increasing the libido of both men and women. Some sexual benefits that Mucuna pruriens can offer are it helps men last longer during sexual intercourse, increase the mother’s lactating capability when she’s breastfeeding, treats vaginal discharge problems and excessive menstrual bleeding.

The high content of L-dopa is Mucuna Pruriens is responsible for the creation of dopamine, which also increases testosterone. Testosterone is responsible for the development of male sexual characteristics as well as the performance of a person. Testosterone also helps maintain the body’s muscle mass and bone density. Ultimately, it induces the sexual drive of a person. Mucuna pruriens also helps in dealing with premature ejaculation by reducing hypersensitivity in the genitals.

there is little risk in using this natural plant and in fact significantly less than consuming highly processed supplements which contain unnatural ingredients.

The L-dopa in Mucuna Pruriens is giving a sense of being happy or a sense of wellbeing which is of course not to the extent of making a person hallucinate like in the case of stronger and perhaps dangerous drugs. The L-dopa of Mucuna Pruriens somehow helps both sexes to last longer sexually, thats why this legume now is considered the magic that increases libido aswel!

Cacao stimulates mood and is know as "the love drug"

Cacao stimulates the release of phenylethylamine (PEA) which boosts focus and awareness. And anandamide (the bliss molecule) which helps you feel good. Cacao is a source of tryptophan which is the precursor to serotonin. And theobromine which boosts blood flow, is a stimulant, and may account for the aphrodisiac qualities. Read more.....

Mucuna pruriens is very potent in dealing with some human health problems, which include infertility in men. Mucuna Pruriens has a lonh history and has been traditionally used especially in the Ayurveda medical system to improve the male virility as it naturally enhances fertility for men.

Some of Mucuna Pruriens natural effects have been shown that this legume is very good to increases sperm count and sperm motility. With the enhanced sperm number and motility, it would be more likely that the sperm will survive longer during sexual intercourse and ultimately reach the egg cell. This conclusion is based on several studies conducted both in humans and in animals

A 2008 study published in the journal Fertility and Sterility demonstrated that treatment with Mucuna Pruriens significantly improved semen quality in infertile men. Mucuna helped improve their dopamine, adrenaline, and non-adrenaline levels while improving sperm count and motility in infertile men. Chronic exposure to psychological stress is believed to be responsible for several pathophysiological changes in a person’s neuroendocrine system, including sperm production.

Mucuna Pruriens seeds has been an effective treatment of Parkinson’s disease (PD) in many patients. Especially for patient that suffer financial difficulty in getting treatment. Think of places like Africa, where Mucuna grows naturally, but financial means for medication are harder to get by.

In the treatment of Parkinson’s disease, the Mucuna Puriens seeds are used as powder extract. Mucuna Pruriens seeds are very rich in natural levodopa, and seem to be more effective and less toxic than the synthetic preparations in Sinemet, Madopar, or Stalevo, used as a medical treatment for Parkinsons.

Famous neurologists have patented methods of extraction for its advantages over the synthetic forms, Sinemet and Madopar. This natural levodopa is less toxic and has a faster and more lasting effect and can delay the need for pharmaceuticals and combination therapies. Currently, there are many patients with Parkinson’s disease who take Mucuna Pruriens, But this should always be taken under medical supervision.

Here are some of the current studies done on Mucuna in relation to Parkinson's ( 1, 2, 3, 4 ). Some neurologist are very positive about the use of this natural remedy, however some believe we need further studies and therefor it is always advised to first check with your neurologist before starting a natural remedy

In India, Mucuna has been the main healing herb for three thousand years. All parts of the plant are used in more than 200 indigenous medicinal preparations. Mucuna is recommended in Ayurveda to treat more than 200 diseases—as a vital tonic, an aphrodisiac, a remedy to reduce stress, a good diuretic, etc.—and is also used against parasites, to control diabetes and lower cholesterol. And, of course, it is a treatment for kampavata (the equivalent of Parkinson’s disease). Western science seems to confirm many of these effects now.

The seed of the plant is the most useful part of the plant. This is where the source of the potent extract comes from. Extract can also be sourced from the pods, hairs and roots of the plant as well. 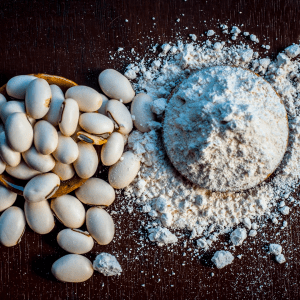 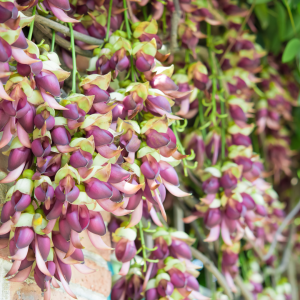 The high concentration of L-Dopa on Mucua pruriens is used as a nootropic because dopamine itself cannot cross the blood-brain barrier. Dopamine is essential for memory, cognition, and a positive mood. A lack of this neurotransmitters can lead to a lower mood state, loss of memory, brain fog, poor energy, and more. And if left unchecked will eventually result in neurodegenerative diseases like Parkinsons.  L-DOPA helps to increase growth hormone levels in the brain. Boosting the production of neurons and glia cells affecting the formation of memories, and overall brain health. Apart from that Mucuna Pruriens has also been proven to be a very effective brain inflammation fighter. It even has the ability to chelate heavy metals like mercury and lead in brain cells.

Mucuna is a potent Anti venom

Mucuna pruriens extract, according to studies also has an anti-snake venom effect. It helps neutralize the effect of snake venom in the body making it very suitable for outdoor enthusiasts like mountain climbers in the case of any emergency.

Of course, it is not a guarantee that it can completely cure snake bite, but it is giving individuals somehow a fighting chance towards preventing the effect of the venom until medical attention is reached. 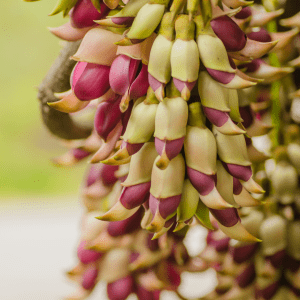 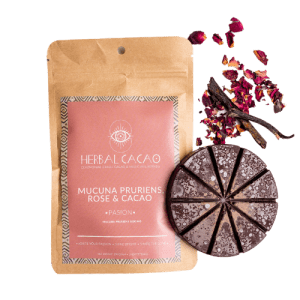 Who should be cautious when taking Mucuna Pruriens?

Mucuna Pruriens is very safe and is usually well tolerated. Of course there may be a personal sensitivity. For example you could get some intestinal complaints at higher doses, however this is very rare.

Dopamine dependency has only been witnesses when HIGH and regular doses are taken.

Use of Mucuna Pruriens is not recommended during pregnancy and lactation, as dopamine inhibits the release of the pituitary hormone prolactin.